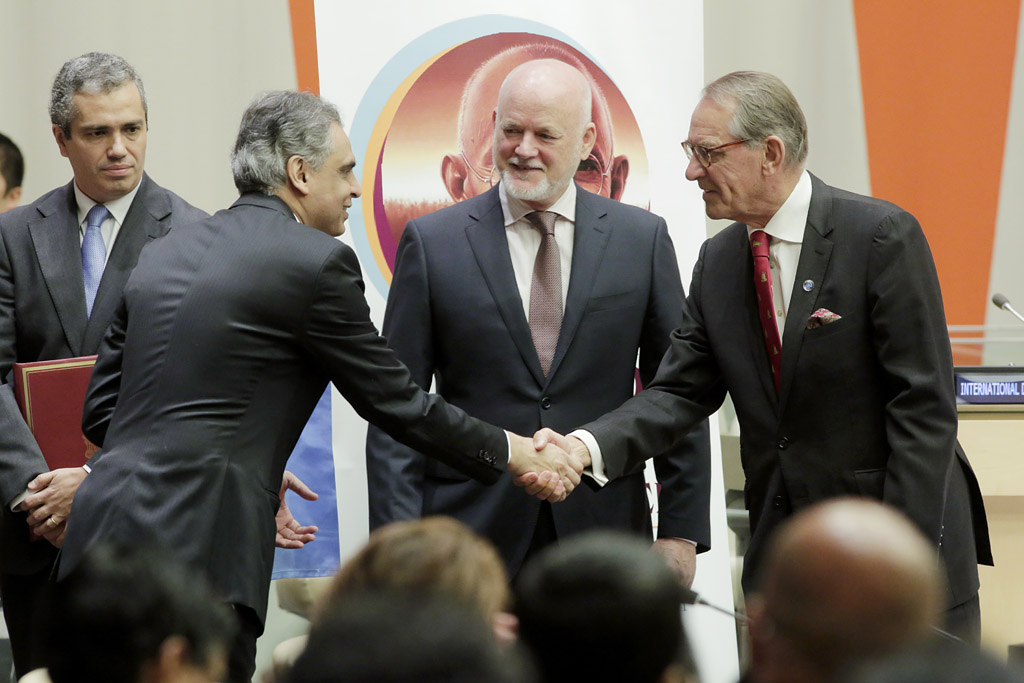 India today ratified the Paris Agreement on climate change at the United Nations Headquarters in New York, bringing the world ever closer to the treaty’s entry into force.

“The country is embarking on a sustainable development pathway. Prime Minister [Narendra] Modi calls it ‘development without destruction,’” UN Deputy Secretary-General Jan Eliasson said after witnessing India becoming the 62nd country to deposit a legal instrument of ratification for the climate pact during a commemorative event on the International Day of Non-Violence.

India has chosen the International Day and the birthday of Mahatma Gandhi, leader of the country’s independence movement and pioneer of the non-violence philosophy, to join the climate accord.

“There is no better way to commemorate the great Mahatma Gandhi and his legacy of peace for people and planet,” Mr. Eliasson said.

The Agreement, which calls on countries to combat climate change and limit global temperature rise to well below 2 degrees Celsius, will take effect 30 days only after at least 55 countries, responsible for 55 per cent of global greenhouse gas emissions, deposit their instruments of ratification.

With today’s action by India, which accounts for 4.1 per cent of the emissions, the Agreement only needs slightly more than 3 percentage points to reach the remaining 55 per cent threshold.

In a statement issued by his spokesman, United Nations Secretary-General Ban Ki-moon, who is visiting Europe, warmly congratulated India for ratifying and formally joining the Agreement.

“India’s leadership builds on the continued strong political momentum from Paris for urgent global action on climate change,” the statement said. “The Secretary-General calls on all Parties to accelerate their domestic procedures in order to join the agreement as soon as possible this year. Action on climate change is crucial for achieving the Sustainable Development Goals (SDGs) and creating a more prosperous, equitable and livable future for all people.”

Adopted in Paris by the 195 Parties to the UN Framework Convention on Climate Change (UNFCCC) at a conference known as COP21 last December, the Agreement was signed in New York on 22 April this year by 175 countries.

During the UN General Assembly’s general debate, which ended 26 September, the number of countries that deposited their instruments of ratification reached 61, crossing one of the two thresholds required to bring it into force. The world’s two largest emitters, China and the United States, had already joined the Agreement.

At a briefing three days ago, David Nabarro, the UN Secretary-General’s Special Adviser on the 2030 Agenda for Sustainable Development, expressed confidence that the Paris Agreement will enter into force at some point this year, highlighting that besides India, at least 14 other countries, representing at least 12 per cent of global emissions, have committed to ratifying the pact.